I got sent a Ninja Foodi and asked to experiment. So I spent eight hours making a sandwich…

The Foodi landed like an alien craft. It is large and futuristic and covered in buttons. But the amateur chefs of the internet had promised great things on other reviews – unctuous stews, chips fried in the air, roasts done in 30 minutes – so I broke a lifelong habit and looked at the instructions. Then I went to work.

Eight-hour pulled-pork sandwich with chilli chips and avocado mayo
This is an adaptation of a recipe from the BBC good food website. I added the English mustard and more seasoning. I also think it might benefit from cider in place of some of the apple juice, but laid off the booze this time.

Method
Slice the meat into four chunks. Mix the seasoning, flour and spices together. Rub these over the meat so there’s a lovely crust. Brown the meat in the Ninja Foodi pot (lid off) with some oil for a minute or two. Mix the marinade ingredients in a jug, then pour them on top. Chuck the onions in too. Turn it to slow cooker mode, put the pressure lid on top (set to vent). Set the heat to ‘lo’ and the time to eight hours. Walk away with the smug satisfaction that you are creating something of such unctuous glory. After eight hours, scoop the meat out (you can leave it for longer, as the cooker switches to a ‘keep warm’ mode). It’ll fall apart, soft as butter – just use two forks to helps strip it into pulled pork. Then cover and keep warm as you cook your chips.

Ingredients
Loads of spuds, cut into whatever shape you like your chips (but keep sizes roughly consistent)
1tsp olive oil
Chilli flakes

Method
Mix the oil and the chips in a bowl for an even coating. Sprinkle the chilli flakes over the top. Give it all a good shake and stick it in the air fryer for 20 minutes at 190c. Shake halfway through.

Method
Put the above through a blender until it’s a lovely green paste.

I piled the meat into a brioche burger bun with barbecue sauce and a slice of apple on top as a nod to my five a day. It may have taken eight hours to create, but it took about four minutes to eat. So then I had another one. While there’s lots this machine can do, I think the slow cooker and crisper are likely to have the biggest impact on my Sunday lunches, knowing that while I tangle with parenting, meaty juices are silently brewing away in the background.

The Kit
The Ninja Foodi is a pressure cooker and air fryer in one, but it also does lots more, depending on which lid you use. With the pressure cooker lid on you can steam veg, slow cook (great for really deep flavours like stews) or pressure cook (like cooking in a giant kettle, and typically healthier than baking or roasting). With the crisper lid on you can air fry (similar crunch and flavour to pan or deep frying, but with a tiny fraction of the fat), crisp or grill. And just leave the lid off to sauté in the super-non-stick pot.
Head to www.ninjakitchen.eu/uk to find out more.

This post was sponsored by Ninja Kitchen. What does that mean? They sent us the kit and paid us to write a blog post (and Instagram posts), but they don’t tell us what to say. We write honest reviews and only accept jobs for products we like. If something doesn’t work for us, we say sorry and send it back. 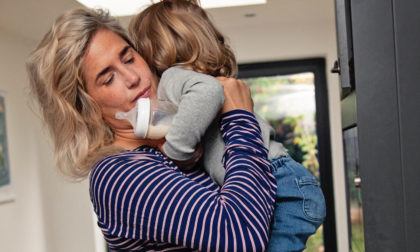